Montreal, February 9, 2021 – The Society for the Protection of Animals (SPA) Canada invites you to the 32nd edition of the National Anti-Fur Day, with the media stunt “I’d rather go naked than wear fur”.

On February 12, at noon sharp in downtown Montreal, QC, the global movement has been much talked about in recent years because of its boldness. Indeed, the participants will be totally naked ‘wearing’ a simple poster with the name of the event written on it. This is a powerful way to get the message out of boycotting the fur industry. 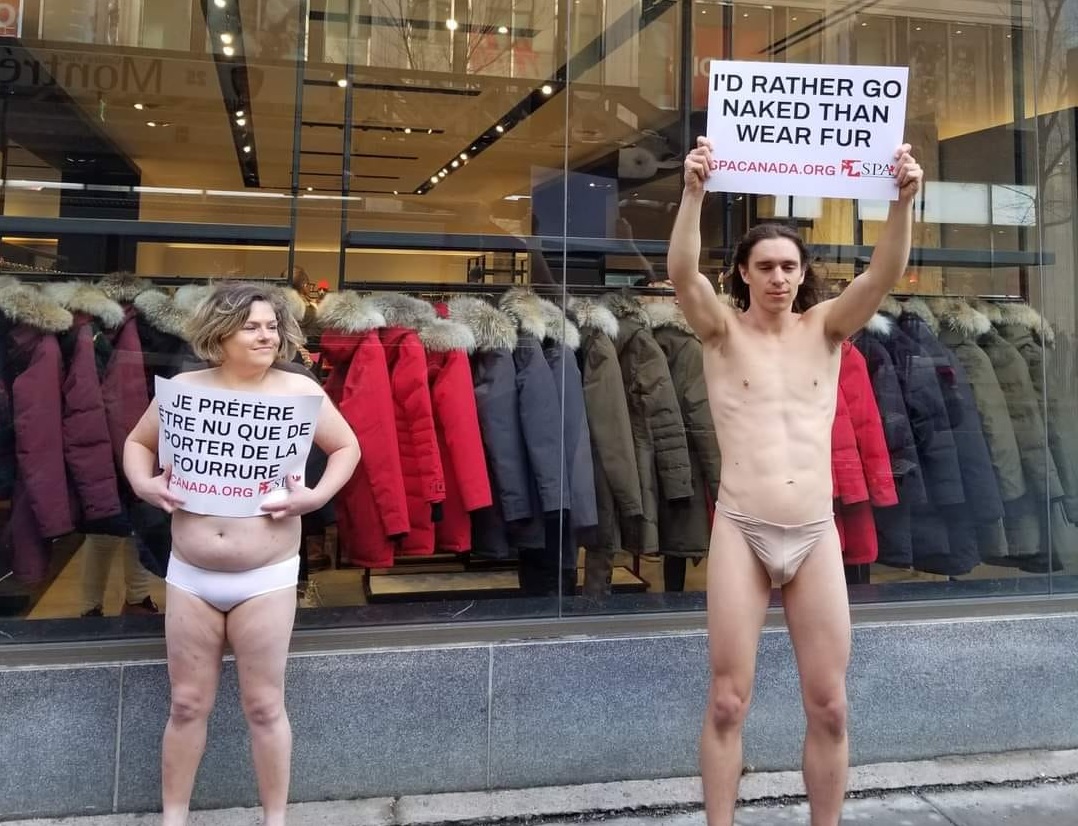 The first edition of National Anti-Fur Day was launched on Valentine’s Day in 1989 by Action Volunteers for Animals to unite activists across Canada who is engaged in local anti-fur campaigns. Activities since the inception of this day include demonstrations, marches, street theatre, anti-fur articles/advertisements in major newspapers, anti-fur billboards in fur districts, letters/petitions to companies that sell fur and more.

Last year SPA Canada locked two activists in a cage clad in bloody fur coats in front of the La Baie in downtown Montreal. Recall that the Hudson’s Bay Company was founded in 1670 solely for the fur trade, making it a prime target for activists against the fur industry. 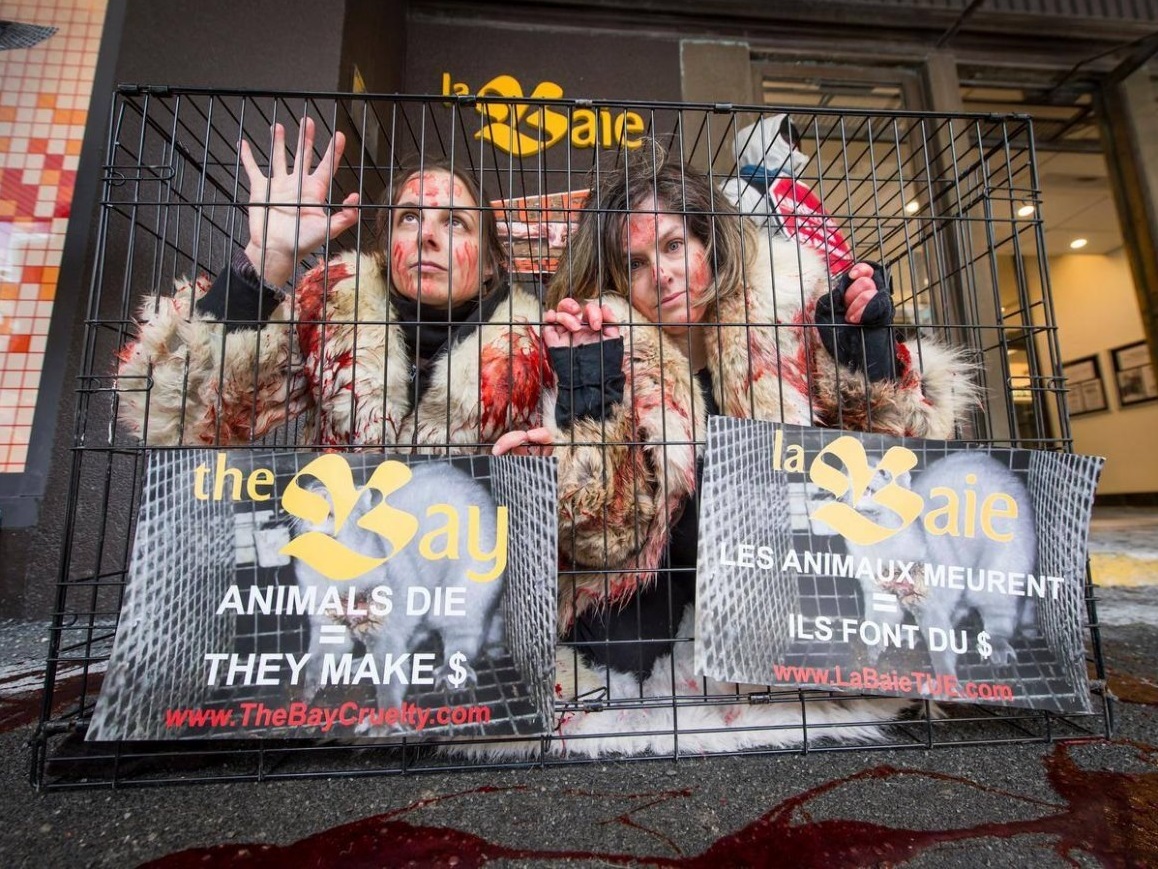 The fur industry in Canada

Although many countries like Austria, Bosnia and Herzegovina, Belgium, Croatia, Czech Republic, Luxembourg, Netherlands (fox breeding ban 1995, chinchilla 1997, mink 2024), Northern Ireland, the Republic of Macedonia, Serbia, Slovenia and the United Kingdom have banned fur farming, fur farming and trapping in Canada continue to exploit millions of animals. Collectively, the fur industry contributes nearly $ 1 billion annually to the Canadian economy. Today there are fur farms in almost every province, but they are mainly located in Nova Scotia, Ontario, British Columbia, Newfoundland and Labrador, Prince Edward Island, Prince Edward Island and Quebec *. Over 85% of Canadian fur clothing manufacturing is located in Montreal.

The fate of animals used in the fur industry 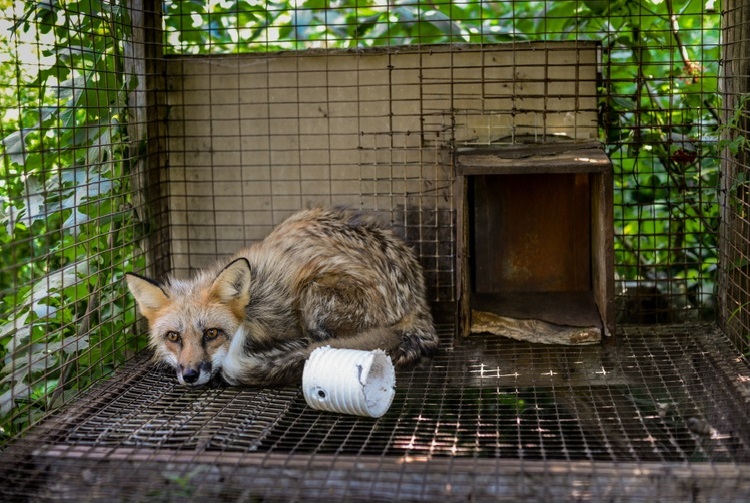 Photo: We Animals: A red fox at a fur farm in Quebec. Jo-Anne McArthur / #MakeFurHistory

“The fur industry is the worst. It is completely immoral to make animals suffer from such kinds, just to look good. There are so many other ways to keep warm, in a totally ethical way. Boycott the fur industry! ” According to Dominique Routhier, Acting Director General and Animal Biologist of SPA Canada. Canada must join its compatriots in banning all animal exploitation in the production and sale of fur.

The 32nd annual National Anti-Fur event will be held on Friday, February 12 at 12:00 p.m. in Montreal, Qc, at 585 Sainte-Catherine West, in front of The Bay as we join cities across the country to educate and inform the public about the fur industry.

The event is not open to the presence of demonstrators but rather to people wanting to participate in the concept “I’d rather be naked than wear fur”. If you would like more details, contact SPA Canada at 514-808-7330 or at activisme@spacanada.org.

SPA Canada is the largest national non-profit organization dedicated to the mission to promote the defence of animal rights through education and awareness.

Animals don’t have a voice – they need you to speak for them!